Folate coenzymes are responsible for the following important metabolic functions:
1) Formation of purines and pyrimidines, which in turn are needed for synthesis of the nucleic acids DNA and RNA. This process allows cell replication to occur and is thus essential. This is especially important during fetal development in the first trimester in preventing birth defects, such as neural tube defects,
2) Formation of heme, the iron-containing protein in hemoglobin. This enables oxygen transport throughout the bodyand thus energy production.
3) Interconversion of the 3-carbon amino acid serine from the 2-carbon amino acid glycine.
4) Formation of the amino acids tyrosine from phenylalanine and glutamic acid from histidine.
5) Methylation of homocysteine into the amino acid methionine. Elevated levels of homocysteine have been implicated in a wide range of health disorders including atherosclerosis, osteoporosis, Alzheimer’s disease, and depression. In the reconversion of homocysteine to methionine the body uses the methionine to make the important amino acid s-adenosylmethionine (SAMe) which is known to be helpful in cases of depression.
6) Synthesis of choline from ethanolamine,
7) Formation and maturation of red and white blood cells, and
8) Conversion of nicotinamide to N’-methylnicotinamide.
9) The production of certain neurotransmitters such as dopamine, adrenaline and noradrenaline rely on the methylation reaction which is dependant on THF.
10) Energy production also relies on the methylation reaction, and thus MTHF, and a slow rate of methylation has been linked to chronic fatigue. 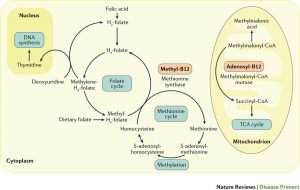 Folic acid is converted into its active form known as Methylfolate by an enzyme known as dihydrofolate reductase. A genetic defect called MTHFR gene polymorphism is responsible for dihydrofolate reductase malfunction which prevents the activation of folic acid. A simple blood test (called a MTHFR Gene Test) can determine if you carry this faulty gene and thus are unable to convert folic acid into its active MTHF form. Some researchers believe that up to half of the population may carry this defective gene. Symptoms of this can include weight gain, fatigue and depression. If found to be present it can easily be treated by using folinic acid or better still Methylfolate.

Which Form of Folate is Best?

(1) Folic Acid requires “activation” by the enzyme dihyrofolate reductase for it to be effective. If you have MTHFR issues then you cannot effectively convert Folic Acid so it may not  be an effective supplement for you.

Numerous drugs are also known to inhibit the body’s ability to utilize folate, including: 1) aspirin, 2) cholesterol lowering drugs, 3) oral birth control pills, 4) antacids, and 5) methotrexate when used for rheumatoid arthritis. When taking these drugs or suffering from the conditions mentioned above it is recommended that you take either 800 mcg daily of folinic acid or 1mg of MTHF.

(2) Folinic acid, which also is known as 5-formyl tetrahydrofolate, readily converts into tetrahydrofolic acid (THF- a folic acid derivative). It therefore has vitamin activity which is equivalent to folic acid. Folinic acid however does not require the action of the enzyme dihydrofolate reductase for its conversion into the active form so is considered more effective. Folinic acid, therefore, allows for many metabolic processes, most notably DNA synthesis, to occur in the presence of dihydrofolate reductase inhibition which would otherwise be unable to do so if using folic acid.

(3) Methylfolate (5-Methyltetrahydrofolic acid, 5-MTHF, Metafolin) is the natural “activated” form of folic acid that does not require any conversion or activation and is considered the ideal choice when treating methylation issues. However many cheaper methylfolate supplements on the market may contain both the active 6S (otherwise known as the L- isomer) and the inactive 6R isomers of methylfolate which are less effective than using the pure active L- form. We sell 1mg of L-Methyfolate (active 6S isomer) as L-Methylfolate Calcium which is the most bioavailable form available.