NAD+ is short for nicotinamide adenine dinucleotide, a vitamin B3 compound used by every cell in your body. It has been well established for decades that NAD is critical for cellular metabolism as it is directly involved in mitochondrial function and ATP production. Chemically speaking, there is a difference between NAD+ and other forms of NAD. NAD+ is the oxidized form of NAD while NADH is the reduced form of NAD. We are currently interested in the oxidised form of NAD+. Not only is it essential for mitochondrial function but more recently it has been discovered that it is also in involved with DNA repair and epigenetic signalling through its regulation of sirtuin enzymes. On top of this, NAD+ may also increase levels of cyclic ADP-ribose, which is a messenger molecule responsible for the exchange of information inside and outside of cells.

NAD+ is an essential direct cofactor of key enzymes responsible for longevity called sirtuins. Sirtuins, specifically SIRT1 and SIRT3, are intimately related to longevity through their control of gene expression and require NAD+ for their activity.

Research into the sirtuins continues to yield substantial information on how to control aging. By activating these sirtuins, we’re able to gain control over anti-aging “switches.” SIRT enzymes “turn off” certain genes that promote aging, such as those involved in inflammation, in fat synthesis and storage, and in blood sugar management. 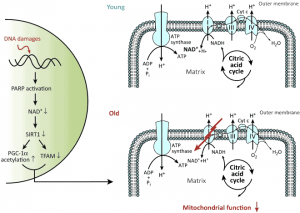 Many NAD+ researchers believe if we can artificially raise NAD+ levels through supplementing it can trick the body’s cells into thinking we’re younger. A research team led by Dr. David Sinclair of Harvard Medical School found that “raising NAD+ levels in old mice restores mitochondrial function to that of a young mouse.” In other words, “Examining muscle from two-year-old mice that had been given the NAD-producing compound for just one week, the researchers looked for indicators of insulin resistance, inflammation and muscle wasting. In all three instances, tissue from the mice resembled that of six-month-old mice. In human years, this would be like a 60-year-old converting to a 20-year-old in these specific areas.” Human studies are also underway to determine if similar benefits occur for us however results will be a few years off yet, although initial results are encouraging.

NAD+ is produced via the pathways indicated below. By far, the greatest source of NAD+ is via the salvage pathway where NAD+ is recycled from NAM, NA, NR, or NMN.

We can take advantage of this and supplement the precursors Nicotinamide Ribose (NR) and NMN to help increase NAD+ levels. These supplements have been proven to increase endogenous NAD+ production in peripheral organs. 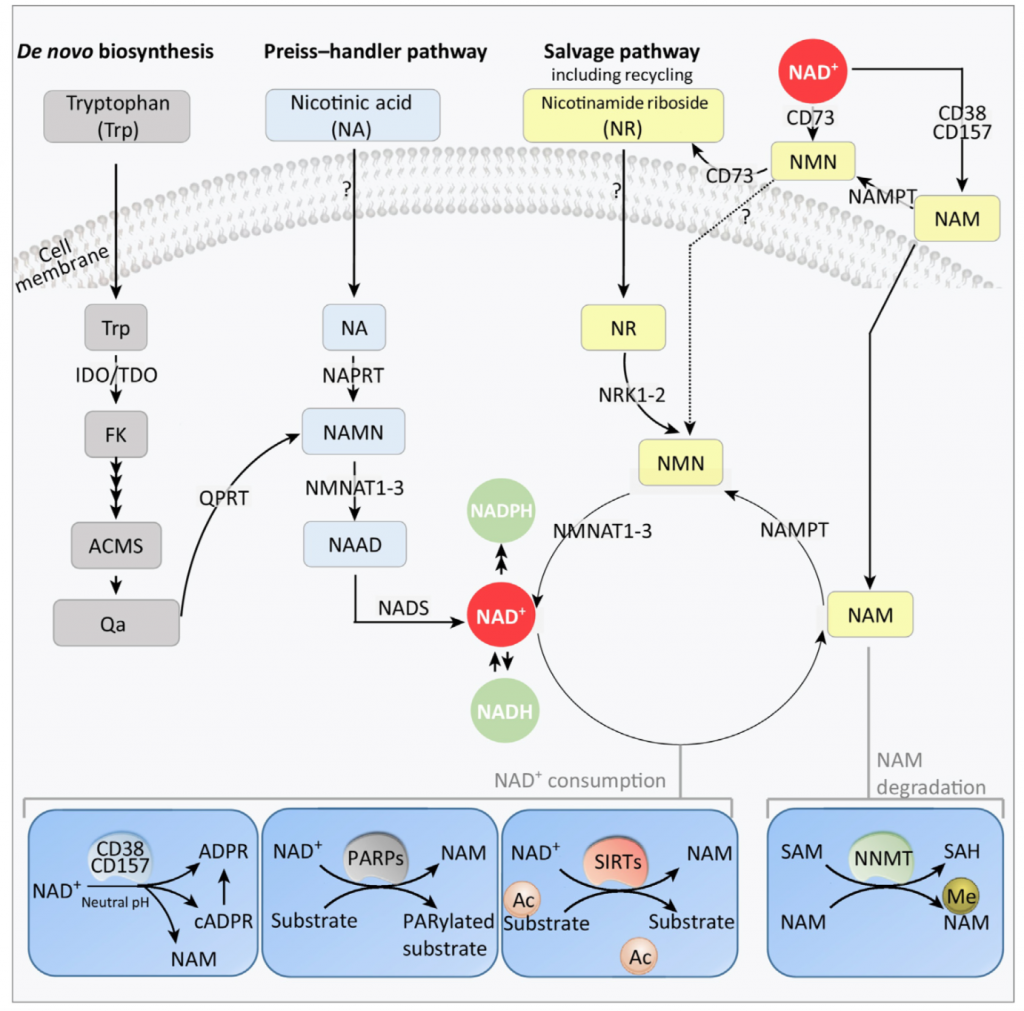 This might explain why NAD+ clinics in the US have found success treating addictions and other brain imbalances with IV NAD+ and why NR and NMN have not been used in similar fashion. NR and NMN have however been shown to restore NAD+ levels in the peripheral tissues.

NAD+ itself cannot enter the cell in peripheral tissues. It first must be converted into NMN or NR where it can be taken up into the cell and then converted back into NAD+ before entering the mitochondria. This process is not the most efficient for boosting peripheral intracellular NAD+ levels where it may be more efficient to use the NR or NMN prescursors. Ideally to increase intracellular levels of NAD+ both within the brain and peripheral tissue a combination of NAD+ and either NR or NMN would appear to be the best option. 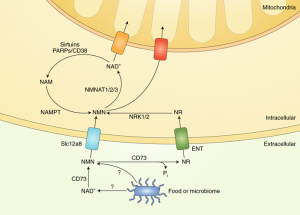 Various NAD+ precursers are also available which increase intracellular NAD+ levels and include Nicotinamide (Vit B3) which can be recycled to NAD+. Doses up to 600mg a day should be effective however exceeding this dose could potentially result in a decrease of NAD+ due to a negative feedback effect.

Nicotinic acid is another option but is known to cause a flushing side effect.

Nicotinamide Riboside (NR) is also available with studies showing it increases NAD+ levels in humans by 40-90% with no side effects. Our studies/testing show it is more around the 30%  mark. Our research and experience indicates Nicotinamide Mononucleotide (NMN) is the best precursor currently available and the one we recommend.  It is available as sublingual powder and enteric coated capsules from us.

Inflammation, oxidation and aging are a major cause of the decline of NAD+ levels so should be avoided.

Our Pharmacy supplies NAD+ infusions and NAD+ SubQ injections on prescription.  Enteric coated slow release capsules are also available over the counter. Our capsules are enteric coated and sustained release which prevents disintegration of NAD+ during transit through the digestive system. Contact us for details.

We were able to introduce this compound into Australia with the assistance of one of America’s leading experts on NAD who has administered NAD to thousands of patients over his 30+ year career. We acknowledge Dr Richard Mestayer from the Springfield Wellness Center in the US for his guidance.

NAD+ infusions have been used in humans since the 1960’s to treat drug addiction with an impeccable safety record. It is commercially available in South Africa for alcohol withdrawal.The only side effect known as the NAD+ flush reported occurs during the infusion process and can easily be overcome by slowing down the rate of administration.

In order to obtain more information or alternatively to arrange a consultation you can contact us.